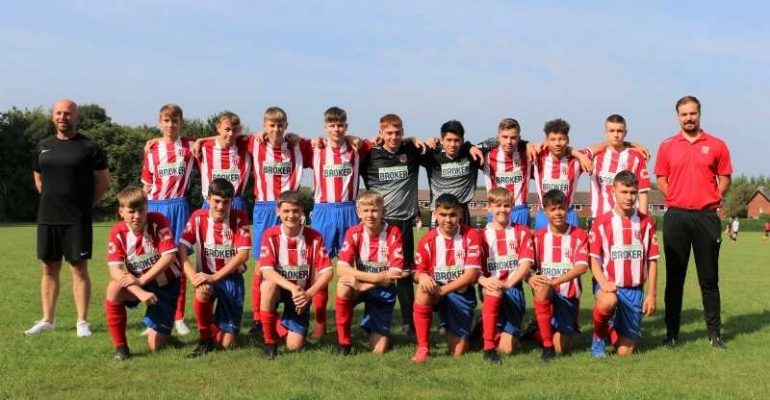 We’ll let you in on a little secret, our uber-talented case manager Tom is leading a double life.

That’s right, not only is he a case manager, a husband, a father and a friend, he is also a coach for his son’s football club, the Ribble Wanderers Under 15s in the Central Lancashire Junior Football League.

Tom passionately volunteers most weekends to help the troop of 17 aspiring footballers sharpen their dribbling skills and fine-tune their shoot-outs. We’re so proud of his dedication to the squad, The Buy to Let Broker will officially be sponsoring the team for the rest of the season, they will even be sporting the company logo on their brand new kits.

Hailing from several separate schools in the Leyland area, the team enjoys their coaching so much they have been regularly training together since most were under the age of 7. Tom got involved with the coaching over 5 years ago and they have continued to go from strength to strength having returned to the Premier division this season.

Coaching alongside former pro footballer Rob Trees, Tom and the club supports and develops the players both on and off the pitch with fun away weekends organised for both the players and their parents.

What started out as a fun kick around with a few mates has now developed into a family-friendly official club that allows all abilities to play regular football and develop their skills. The club has now even achieved FA Chartered Standard, which allows them to play in FA competitions.

True champions, the team has already kicked the season off with a great start having won their first match against New Longton Rovers JFC U15 3-1!

Lads, we’re so proud to be your official sponsors, keep up the fantastic playing. The whole team will be rooting for you for your next match against Lancashire Academy Football Club u15!

All hail Chris, our CeMAP champion

Cast Your Vote In The British Bank Awards 2021

It’s Official – We’ve The Best Admin In The UK